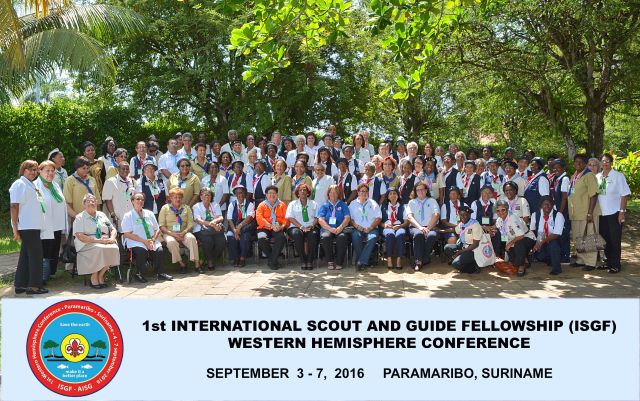 The 1st Western Hemisphere (WH) Conference took place in Paramaribo, Suriname from 3 till 7 September 2016. The place of the meeting was in hotel Torarica, a neighboring hotel, close to the Eco Resort Inn where most of the participants were accommodated. 90 members from 10 countries: Aruba, Brazil, Chile, Curacao, Haiti, Netherlands, Spain, Suriname, Uruguay and USA were present and they had a great time.

Keynote speaker Dr. Haydi J. Berrenstein, National Policy Coordinator for Environment, Cabinet of the President of the Republic Suriname presented a lecture about the theme “Save the Earth, make it a better place”.

The Memorandum of Understanding for the WH Region was accepted by the Conference with some minor changes. Some motions were accepted or defeated and a full report will soon become available.
A Regional Committee of 4 was elected.

Clothing of the many different cultures in Suriname as well as traditional dances was showed during Suriname Night at the Congress Hall where typical Suriname food was served. A Treasure Hunt was quite a challenge and the participants went into groups which were divided according to the districts in Suriname. Typical Scouting technics and questions were part of the game.

They were informed about a community project led by Foundation WI Oso (Our House) who aims are to enable disabled young people in Suriname to work for a decent future by offering: Custom housing, possibility of training, theoretical and practical and providing employment also to those who do not live on the premises.

A campfire took place during this Conference on the premises of the Girl Guides of Suriname with acts, songs and yells of the participants. The farewell dinner was held in Ramada Inn and Suriname is not Suriname without dancing.

The post tour went to the Anaula Nature Resort, a culturally rich and diverse region in the Amazon forest. They visited residents in far-flung communities living according to centuries-old traditions in untouched forests teeming with rare flora and fauna. The 48 participants of this post tour travelled into small motor-corals down the river. They also searched for caimans and walked into the forest. It was a real challenge.

The next WH Conference will be held in New York, USA in 2019 hosted by CASEGHA/USA group in the month of September.