My first visit to the Forum in Grossarl, Austria

I drove 9 hours by car to participate in the 41st European Guild Forum, 10-17 January 2009, Grossarl, Austria and I felt immediately the hospitality when I arrived and met people. What I've heard is that the village of Grossarl got a future when it was chosen, about forty years back, to host the annual European Forum for adult scouts. Not a bad choice because enough mountains and much goodwill of everyone in the village. What do you expect when you leave the Netherlands from the cold and the snow line started near Munich. Grossarl was covered on the mountains with snow and a slightly five degrees celsius below zero and it would take until Wednesday before fresh snow would fall. 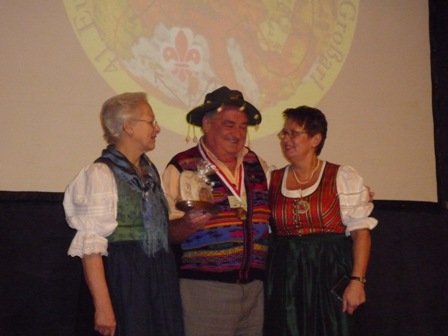 On Saturday the participants experienced the friendly atmosphere at dinner at the various restaurants. To have the gospel singers at the fairly well packed church at the opening was a very nice start. In total there were 160 participants from 14 countries really welcome and that was Sunday morning again repeated with showing off the banners and gun shots, and for those that wanted a drink.
On Monday morning we attended the opening of the exhibition as a start on the subject of the Forum: The new migration "Islam in Europe". We faced an introduction to Islam with an exhibition and cinema with a multitude of films and a real discussion evening. Several participants called it the best topic in Grossarl history: Chapeau for the organization and the participants. 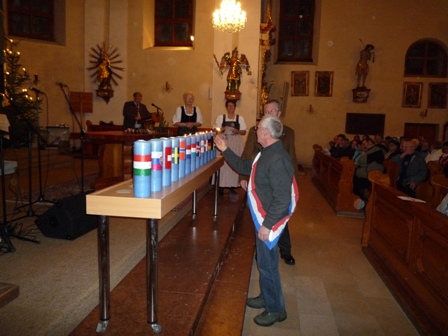 There were workshops such as singing, folk dancing, lantern making, painting eggs and cooking in the restaurants and others. I also took part in the curling competition. I met the inhabitants of the village who told about their profession or hobby. These meeting places and the Gilwell-reunion were very suitable to expand your network and to make new friends.

The visit to the European table and the performance by all countries of their Peace prayer was like a warm fraternisation of all adult scouts. Because you did not want to miss some programmes, there was still time for skiing and in my case I got a forced torn calf muscle so I was limited to one morning. But I admit that it wanted to do both as the possibility of skiing was there and the nearby ski slopes were covered with wonderful snow. 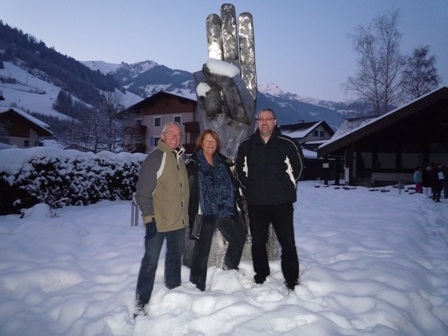 The organization decided to organize the next European Forum in summer. However, it is clear that they want to invite more participants to come and to reassure that the older participants keep coming. I think what I've seen this week that it will succeed in 2010!

Have a look in the photo gallery.

The 42nd version of the European Guild Forum will be held from 19-26 June 2010. Keep an eye on www.forumgrossarl.at