ISGF World Committee had their annual meeting from 19 to 22 March 2014 at Tavernerio, near Como in Italy. The agenda included an evaluation of the development of the membership in the regions and the approval of the financial report 2013. The meeting was a platform to discuss the development of ISGF, goals and projects for the year and also constitutional matters and partnerships.

The World Committee was very much focused on the agenda and program of the 27th ISGF World Conference in Sydney, Australia that will be held from 10-15 October 2014.

The minutes of the meeting will very soon be sent as usual to all the Fellowships. Next World Committee meeting will take place in Sydney, Australia on the 15th October after elections for the new committee. 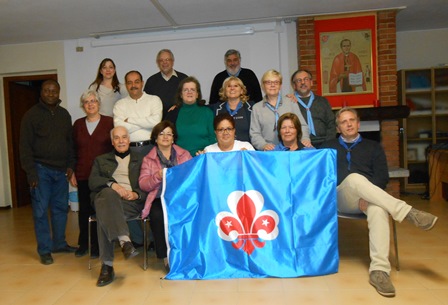 Usually the World Committee has its meeting in a country of one of its members and for a special reason, this time Italy was chosen because it is the biggest Fellowship in Europe. MASCI (Movimento Adulti Scout Cattolici Italiani) hosted the meeting in the beautiful region of Lombardia and we had the opportunity of sharing information during a very agreeable evening with the new elected President Sonia, the International Secretary, Franco, the Secretary from Lombardia, Fausto, the national counselor, Angelo and Mariano from the Lombardia region.

The Community of Como invited the World Committee and the Bureau members to have dinner at their headquarters, where a fantastic Italian meal was served followed by enjoyable songs and the unforgettable hymn of the Como World Conference.