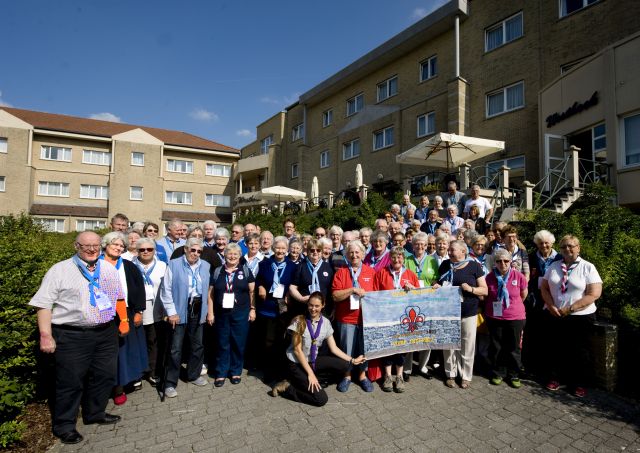 All 76 participants from 12 countries had big smiles on their faces when it was time to leave on the 11th of September. They were shaking hands in scouts/guides fashion, hugging each other; they were promising to write to each other and to attend the next meeting (European Conference in Tours, France or before!). And then, there would be other occasions: a workshop or even a new European Guild Forum in Grossarl. Wonderful!

Such a pleasant atmosphere with respect to the theme « Living together »! It is true that for five days the multiple facets of Belgium: learning the effects of immigration as early as 5th grade (primary); transforming and renovating declining industrial cities; conflicts that 200 years ago (Waterloo) and 100 years ago (the Great War) still devastated our European Nations that remained friends throughout or became our friends thanks to dialogue and democratic compromise.

Three of us, Dave Mowbray, Hans Slanec and I laid wreaths with our logo and poppies at the Menin Gate in Ypres. This monument symbolises the sacrifice of soldiers originating from the whole Commonwealth in 1915.

Then, in a refreshing young atmosphere, Chip (Veerle Haverhals), member European Scout Committee and our guest speaker, made us aware of how WOSM-Europe battles with discriminations, proposes a new understanding of its method so that it can be shared with the largest number (there are now over 50 million Scouts and Guides in the world) and how FOS – the pluralistic Dutch-speaking Belgian Federation - applies this concept - through a game – in our society. There are numerous and multiple barriers: financial, ethnical, gender, cultural, etc. We all can join our efforts to resolve them.

Our Flame of Friendship was lit for the whole duration of the Gathering to unite us in harmony… and it was done! We finished the Gathering by singing the traditional « Auld Lang Syne ».