This time the message of Peace, Friendship and Solidarity of ISGF was sent from Morocco, during the 15th Mediterranean Gathering in Marrakech, from 22 to 27 October 2015, followed by the post-meeting tour from October 27 to November 2, 2015 to Marrakech, Meknes, Fez, Rabat and Casablanca!!! A very successful and pleasant Gathering thanks to the hard work of the organisers the “Moroccan Alliance of Scouts and Guides (AMPSG)”.
The Gathering was “Under the High Patronage of His Majesty King Mohammed VI”.
180 members from 18 countries from both sides of the Mediterranean Sea but also from other Arab and European countries even from Southeast Asia, (Algeria, Belgium. United Arab Emirates, Spain, France, Greece, Italy, Jordan, Kuwait, Lebanon, Libya, Liechtenstein, Malaysia, Portugal, Switzerland, Saudi Arabia, Tunisia) participated in this Gathering.

A melange of people of different cultures, religions, languages spent together wonderful days during the Gathering as well as during the post-meeting tour. They had the opportunity to talk to each other in harmony, take countless pictures and selfies, exchange life but also Scout/Guide experiences, laugh, sing, share moments of joy and but also of sadness and concern, given the present difficult situation in this corner of the World.
The Theme of the Gathering "Renewable Energy, challenges and prospects" a very important issue for the present and future of our planet, was analysed comprehensively by the professors Adelaziz Bennouna and Adil Benabdellah, followed by a fruitful debate.

Present from ISGF World Committee, were the Chairman Mida Rodrigues, Virginia Bonasegale, in charge of the Southern Europe Sub-region and Nana Gentimi Vice Chairman as well as Cécile Bellet ISGF Secretary General, who was kindly invited by the Moroccan Fellowship to attend the Gathering. Mr. Mohamed Jarraya, International Secretary of Tunisia and Chairman of the Arab Region and Maghreb was also present at the Meeting and translated from French to Arabic and vice versa whenever there was no official translation. The young Scout movement was there as well. Mr. Mohammed Bilrha, Deputy President National Federation of Moroccan Scouting, greeted the participants, while young Scouts helped with the electronic presentations, took pictures and videos and helped wherever needed. A fresh and happy time when Young Scouts sang wonderfully Scout songs.

Highlight of the Gathering was the celebration of the “Fellowship day” by collecting money (695 Euros) to support the World ISGF Project for Haiti.

The visit of the medina, souks and Jamaa el Fna square while in Marrakech, the excursion to Essaouira, lunch and dinners to traditional Moroccan restaurants offered to the participants a good image of the real Morocco, with its rich culture, a blend of Arab, Berber, European and African influences, full of colours, crafts and shapes and designs, unique sounds, strong smells of spices and leather, friendly and helpful people.
During the post-meeting tour accommodation was provided in Marrakech, Fez and Casablanca. The Medina of Fez, the Ifrane city in the Middle Atlas Region of Morocco, the historic sites of Meknes, the Medina, the Hassan II Mosque and shopping in Habous in Casablanca, the lunch offered in Rabat Scouting Centre, are some of the most interesting highlights of this tour. 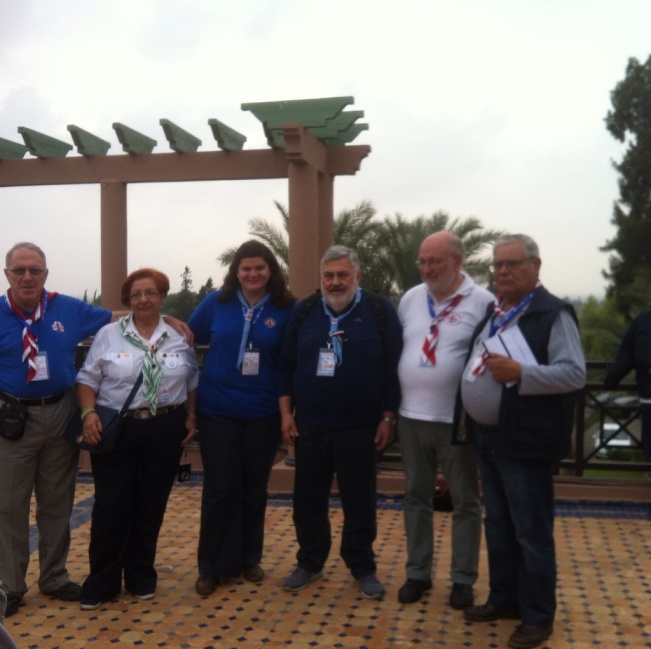 The 4th Southern Europe Sub Regional Gathering (SESR) took place on Saturday 24 October in Marrakesh, as part of the 15th Mediterranean Gathering. The Gathering was organised by Virginia Bonasegale, responsible WCom member for SESR. Representatives from France, Greece, Italy Portugal, Spain and Switzerland were Present. Absent was Cyprus. The Gathering opened with the discussion on the amendments of the SESR Constitution as per the proposals of France and Italy. The proposed amendments were unanimously adopted by the participants. Then in a very and friendly atmosphere each Fellowship indicated its representative and Franco Vecchiocattivi, the Italian International Secretary was unanimously elected Chairman of the Sub-Regional Committee. Their triennial term started immediately. Finally Ana Rodrigues, International Secretary of Spain, was elected by the new Committee as the representative of the Sub-Region to the European Committee, for 2016-2018. Her term will start at the 9th European Conference in 2016, in Tours.

When the time came to say goodbye to new and old friends we promised to meet at the next 16th Med Gathering in 2018, which will be hosted in Greece!!! Be there !!!!!