Quoting our Founder (B.P.´s "Scouting Round the World" -1935). "Here are ... a really mixed lot, but all grinning the cheery Scout/Guide smile and all jolly together, forgetting their differences..., and looking on each other as sisters/brothers in the one family, all playing the great game of Scouting/Guiding together."

The venue was our campsite because all rooms looking into the green where a most exact reproduction of the first scout camp in BrownseaIsland (1907) was displayed. At that place was the opening ceremony with speeches, flag rising, a reading of the Spanish Centenary Manifest - as the whole 2012 is a commemoration of 100 years of Scouting in Spain - and with attendance of young guides and scouts groups from the area.

Lectures emphasized ISGF views on environment. We realized the struggle the Bluefin tuna has been facing to survive in the Mediterranean Sea and what is now done to protect it, before our greed and ignorance can annihilate the species. With the film "Sounds Of The Seas", we discovered peace, calm, charm and poetry, and above all that all inhabitants bordering the banks of our Sea , have a common point as we are originally former descendants of the Phoenicians, so family related.

We learned how ISGF/UNHCR collaboration works around the world. The progress achieved after many years, in a young ladies formative school in Africa, what is accomplished by the International Ambassadors Guild and we learned about the amount of silent and non-publicized work that many ISGF members do on a daily basis and never expecting any recognition, just following our Founder directives.

In each one of the group meetings, some points of the Scout Law were debated considering our adult point of view for daily life and resuming them to a few ideas.

Also the 3rd South Europe Sub Regional Gathering SESR) took place on 2nd and 3rd November 2012, in Cadiz Spain, as part of the 14th Mediterranean Gathering. Sara Milreu Rocha (IS Portugal), was elected as the new representative to the European Committee, and her term will start at the 8th European Conference in 2013. It was decided that the discussion on the amendment of the SESR Constitution to be postponed for the next meeting of the SESR at the next European Conference.

Cultural visits were made to Medina-Sidonia, considered to be one of the oldest cities in Europe. We visited a bakery of Alfajores, a sweet similar to macaroons, its origins coming from "Al-Andalus" and made with a mixture of almonds, nuts and honey paste. In Jerez, we discovered how the breed of pure black Spanish horses are able to dance on their own by following the music and also with a human partner, enjoying an Equestrian Flamenco show. The carriages museum was visited with its art collection and wine cellar with thousands of hundred years old barrels. Visiting Cádiz and its monuments, we learned about the First Spanish Constitution in 1812, called familiarly "La Pepa", as a safeguard on that special time, and which has been taken, later on, as an example to write some Hispano-Americans ‘Constitutions.

Paper handicraft was used in the workshops to prepare our personnel decor for the Andalusia gala dinner (flowers, bracelets, etc.) and which served to have a lot of fun, to know each other better and to create a great friendship climate. The after dinner amusements were a recollection of amateur and professional choirs from the nearby Chiclana town, specialized in different typical songs from all Spanish regions, a few professional Flamenco groups and the "Rocieros" from the Old Wolves Scout group of 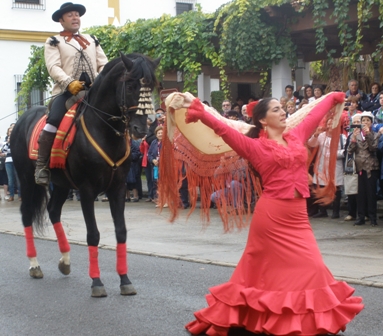 Cádiz who invited everybody to join the dances.

New projects were exposed as an introduction to be developed from now on and to be officially presented at the next World Conference in Sydney, Australia in 014. NSGF Sweden offered its preliminary programme and its invitation to attend the 8th European Conference - Scandinavia - with theme "Crossing Borders", 5 -8 September 2013.

As usual, a total amount of three thousand euros was, distributed in two equal checks and donated to two social food pantries in the area as our contribution to help them with their daily work to feed the needed.

Despite we are adults, we all keep a childish unfulfilled dream deep in our heart, so we were asked to write that dream on a piece of paper and attach it to a balloon and to release it to the Universe during the closing ceremony.

Morocco made its presentation and was chosen to host the 15th Mediterranean Gathering in 2015.