Our journey has come to its end.
After three years of expectation, the moment had come for us to welcome our friends from countries of the Mediterranean and from many other countries in Athens! The 16th Mediterranean Gathering and the 5th Southern Europe Gathering were held from 19-24 October 2018 in Athens, at the Titania Hotel. After that, many participants took a trip to the Peloponnese, based on the city of Kalamata (24-27 October 2018).

195 participants from Algeria, Belgium, Cyprus, France, Germany, Israel, Italy, Libya, Liechtenstein, Luxembourg, Malaysia, Morocco, Portugal, Spain, Switzerland, the United Kingdom as well as the ISGF’s Chairman from Uganda! Along with about 100 members of the Greek Guides Cooperation Division and the Former Scouts of Greece Committee from various cities in our country! All these, together with those who welcomed us in their cities, Kalamata, Sparta and Tripoli, we became a huge multilingual group of friends!!!

Under our motto “Mediterranean, a Sea Odyssey," on Saturday, October 20 we began our imaginary voyage on the sea that unites us, following a journey of Mediterranean cultures through time and the profound ties between them all. We were informed of the serious pollution problem afflicting our sea and heard about small everyday life ways that each one of us may follow in a common effort to stop, or at least diminish, the perils threatening the Mediterranean with a complete destruction. The Refugee Crisis, this enormous issue of our times together with an exposé of the initiatives taken by the Italian MASCI, the Greek Guiding Association and the Scouts of Greece were among the subjects presented in the Gathering. The UGANDA - SOUTH SUDANESE REFUGEE PROJECT 2017-2018 of the ISGF which was presented to us by the Chairman was also relevant. 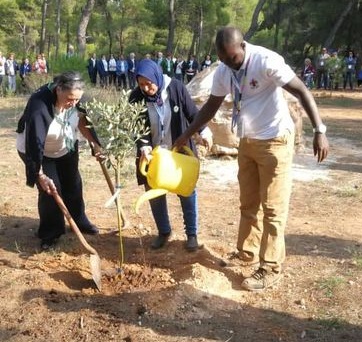 On the next day, Sunday October 21, we were all ready for new experiences - not imaginary this time! We were taken 42,195 kilometers from the center of Athens to the Starting Point of the Classical Marathon Run, where many of us tasted the experience of a mini marathon and were awarded laurel and olive leaves for their participation! We visited the Tomb of the 192 Athenian warriors who died in the victorious Battle of Marathon against the Persians in 490 B.C., and we ended up at the Training and Camping Center of the Greek Guiding Association, 'Konakia'. Here we were to choose among 13 different laboratories: knots, salads, Greek dances, gymnastics, shipbuilding and many others. We enjoyed a traditional Greek meal, we sang and we danced. And in the end, we symbolically planted an olive tree, the symbol of "Peace and Friendship", and we sent a message of hope in life, as Konakia is very close to the area devastated by the tremendous fires of July 23rd 2018. After that we visited the Temple of Poseidon in Sounio and on the way back to the hotel we enjoyed the enchanting coastal route of southern Athens.

Another pleasant experience was awaiting us on the next day, Monday, October 22nd: a visit to the Stavros Niarchos Foundation Cultural Center, where the National Library and the National Opera recently moved, as well as its magnificent park.
In the afternoon, the 5th Southern Europe Sub-Region Gathering was held, where Christos Kouzis from Cyprus was elected Chairman for the next three years (2018-2021) and Ana Rodrigues from Portugal was re-elected representative of Southern Europe to the European Commission, this second term beginning at the 10th European Conference in Bremen, in August 2019.

The last morning was dedicated to a monument that for many people was a lifetime dream to visit: the Acropolis and its Museum. After which our participants formed small groups and strolled around the city. Every evening there was music and dancing - traditional Greek dances from Megara, songs from the Mediterranean by the Apogeio Music Ensemble and an international night with many of the participants wearing their traditional national costumes.

The Gathering ended on the evening of October 23 with a party, where live music, singing and dancing prevailed, with everyone merrily taking part with a cheerful mood.

In the next morning, Wednesday 24rd October, most of the participants set off for an unforgettable four-day tour of the Peloponnese with stops in Olympia, Pylos, the Byzantine castle-city of Mystras, Sparta, Ancient Messini and certainly Kalamata, which was our base for the tour. ”Fellowship Day" was celebrated in the evening of October 25th, on the gorgeous Kalamata beach, with a full moon. Our last stop before farewell was in the beautiful city of Tripoli, the heart of the Peloponnese.

We wish to deeply thank all participants and all those who helped make this event a wonderful memory for all of us!! Until we meet again at the 17th Mediterranean Gathering and the 6th Southern Europe Sub-Region Gathering in Cyprus, in 2021.

We invite you to visit the photo gallery via this link