Highlights of the 13th AsPac gathering

The gathering was hosted by Bangladesh Scout and Guide Fellowship (BDSGF) in BRAC-CDM, Ashulia Savar, in Dhaka from 6 – 11 November 2012 and attended by 70 participants from Australia, Bangladesh, India, Indonesia, Malaysia and Saudi Arabia. Delegates arrived, registered, settled and enjoyed welcome dinner on 6th November 2012.

The event was officially inaugurated by the Minister of Tourism on 7th November in presence of many dignitaries and followed by address of a Chief Guest, Chairman Host Committee, Chairman ISGF World Committee and AsPac coordinator of ISGF World Committee. Reports of the participating countries were shared. The day came to end with best cultural presentations and entertainment by BDSGF.

On 8th November we had a city tour of Dhaka, enjoyed a lunch/shopping in Basundhara Mall and a good evening entertainment by a group of Tribal entertainers in the forestry department. The day came to end with a traditional Bangladesh dinner.

On 9th November the Gathering assembled, approved constitution and AsPac Committee was formally elected by delegates. 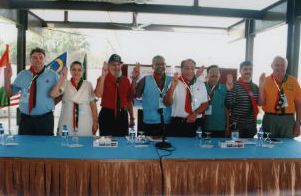 (The committee had its first meeting with a simple agenda to begin their actions after dinner and decided to meet during 2013 in India).

In the afternoon the humanitarian touch of AsPac was reconfirmed by distribution of sewing machines and blankets by Australia and Malaysian delegates to distressed local women, T-shirts/ caps and blankets to autistic local Scouts/Guides by Australia and Saudi Arabia. The moments became more interesting and touchy with performance by autistic Scouts/Guides. The day came to an end with best performances of the delegations with songs, dances and sketches.

On 10th November the participants visited the National Scout and the National Girl Guide Organizations of Bangladesh, exchanged pleasantries and presented gifts to the Boy Scouts and Girl Guides. They also visited a traditional handicrafts centre and assembled for the closing ceremony. The Gathering ended with lots of cheers and applauds of organizers and delegates over a campfire, with barbeque dinner.

The 14th AsPac Gathering will be held in 2015 in Bangalore, India.