Granada Fellowship supports Scouting and Guiding in their region 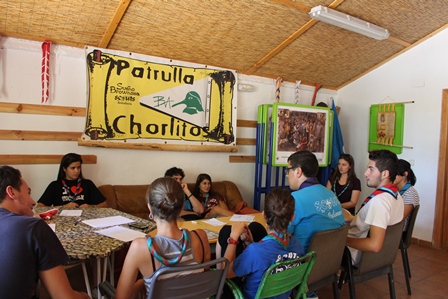 “During the past 10th and 11th of September, about twenty young Scouts (Scouts of 3rd year and Rovers) camped at ValleScout (Restábal, Granada), to debate issues of social relevance within the IV Foro Joven (Youth Forum) of the National Scout Association of Spain (ASDE) in Andalusia. Within this Forum, several issues are discussed and new ideas are provided; many relevant topics for young people are discussed, as:
- Healthy habits in young people, social inequality, bullying, terrorism, immigration, crisis, refugees, associative movements and social networks

All these issues have been addressed from a Scout point of view, analyzing ideas and viable projects that could contribute positively to the resolution of these problems.
The young Scouts have had a first day of debates and round tables, that at night culminated in an happy evening party, reserving the second day of work for sharing and drafting the conclusions and for the evaluation of the activity and the functioning of the Forum itself.
The Local Fellowship of Granada of adult Scouts (AGAE-ISGF) has ceded free of charge to the young Scouts their facilities at Restábal and has financed the transportation from Granada, thus fulfilling one of its main objectives: the promotion of Scouting and Guiding in the city and supporting to the young scouts in the development of projects of social type.
This activity makes visible once again the multigenerational dimension of the Scouting and Guiding and the new ways of cooperation that Scouts can develop in their cities.
Hooray and Bravo for the initiative!!!