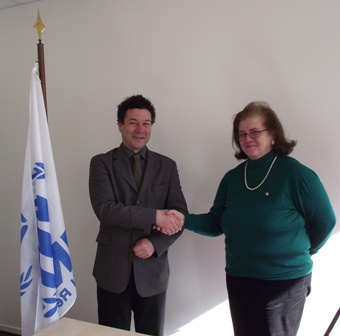 Paris, France, March 26 (UNHCR) – On March 22, 2012, the UNHCR Representation in Paris renewed the global partnership between UNHCR and the International Scout and Guide Fellowship (ISGF).

The aim of this partnership is to enable national representations of the ISGF and UNHCR to implement joint projects to publicize the issue of refugees and other people who come under UNHCR.

“The ISGF and UNHCR share the some ideals and work together for peace in the world” said Midà Rodrigues, Chairman of the ISGF, at the signing of the partnership.

The representative of the United Nations High Commissioner for Refugees in France, Mr. Philippe Leclerc, greet this initiative and said “this global partnership fulfil perfectly the expectations of our both organisation. I hope that many initiatives in many countries will be put into action to take over our consciousness-raising campaigns.”

This partnership follows the last project jointly run in Burundi in December 2010, during which thousands of children repatriated from the Province of Cankuzo and previously exiled in Tanzania, received schoolbags and essential school supplies, thanks to the worldwide mobilisation of the ISGF members.

Signed and renewed for six years, this partnership should certainly allow the members of the ISGF and the staff of UNHCR to carry out constructive actions on a reciprocal basis, which will last in the time and will benefit to people coming under UNHCR.

The signature of this partnership is in perfect consistency with the Millennium Development Goal number 8 adopted by UN in September 2000: ‘a global partnership for development’

With over 47,000 members, the ISGF is an organization for adults in support of Scouting and Guiding. Its essential aim is to support its members to maintain the values learned in the youth movements, in a perspective of service within the community, of a continuous personal development, and of an active support of Scouting and Guiding at the international, national and local levels. The members of the ISGF are the NSGF (National Scout and Guide Fellowship) and are in 67 countries.