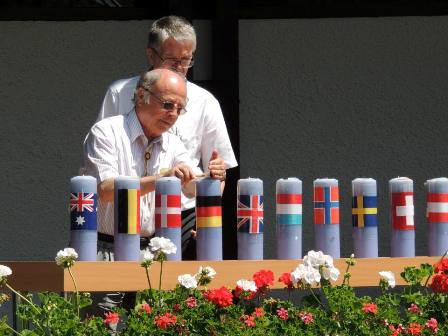 A hot Southerly wind from the Sahara Desert resulted in temperatures between 30 and 39 degrees C, when 132 participants from 11 countries met in Grossarl at the 45th and last Forum, organized by Guild members of NSGF Austria, from 15 to 22 June, 2013. This year the program was as varied as ever with the theme “Maintain your friendship”. The welcome ceremony was an impressive exhibition of the previous 45 years and brought back sweet memories. All the photo books and many of the “guest books” that we signed on our hikes were to be seen as well as all the various tokens through the years were arranged. In the evening the midsummer solstice was celebrated together with folkloristic associations of Grossarl.

A special festival was celebrated in the Church that was specially decorated with blue balloons and where we all participated together with the local people. The motto for the Service was “Generations” and certainly occupied many children. The children’s Church choir sang - very entertaining.

During an activity in meeting new friends we worked in patrols, where we had to smell, feel, taste and guess. Also, light or more strenuous hikes could be done as well as taking a bus trip to various sightseeing points. I did the normal wanderings and had great pleasure in seeing the well-known places of my earlier visits to Grossarl and meeting their inhabitants.

The places to visit this year were Harbachalm, at 1235 m. Here they always decorate the servings with beautiful alp flowers and this time the great-grandfather was very entertaining and took us to a very old fir tree with about 11 stems. It took about 6 ladies to get around it. The next challenge was the Maurachalm at 1620 m. It was wonderful to meet the local people again and also this year we were given music to listen to. The great-grandmother was singing accompanied by her son. The Aigenalm-Paullhütte situated at 1280 m was visited another day. It was a very nice walk in the forest along the river. On the way there we passed the fairly new chapel, commemorating the recently deceased mayor of Grossarl. Quite impressive, because we had shared so many occasions with him.

We had an outstanding excursion to Salzburg. I joined “The Sound of Music” tour, where we were taken to the original film locations of the movie.

This year I achieved my 10-year pin for being in Grossarl 10 times and two years ago I succeeded in earning my silver and gold token for hikes in the areas. I have certainly met many, many friends over the last 10 years, which have proven beneficial in my present work as International Secretary, and I never regret one day that I decided to see what was going on in Grossarl.

Thank you to all organizers for your efforts over time and for he many, good and varied experiences with you. Last, but not least: The Grossarl Tourist bureau has promised to take over some sort of arrangement in Grossarl next summer during the last full week of June, 2014. So, if you are still keen on going to Grossarl in 2014, please mark your calendars accordingly.