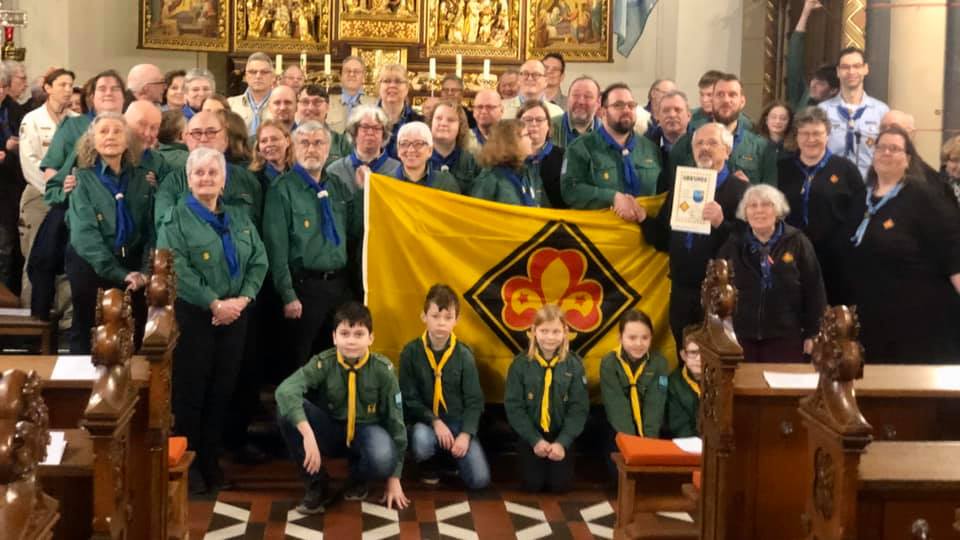 The National Scout and Guide Fellowship in Germany called Verband Deutscher Altpfadfindergilden e.V. (VDAPG) is one guild richer, the Noah’s Guild.
During a service held by the parish of Schaag /Nettetal, Germany in the church of St. Anna, "Noah's Guild" was ceremonially welcomed by Helmut Reitberger, the chairman of the VDAPG.

The newly elected guild master Peter Giezen accepted the foundation certificate, the VDAPG banner and the manual on behalf of the new adult group. Together with the approximately 25 new members who were awarded the „Old Scout“ neckerchief, he welcomed the guests from over 10 guilds from all regions of the association and friends from the Netherlands including the honorary chairman of the VDAPG, Herbert H. Krisam, to a reception in the rectory with delicious food and drinks.

For the board of VDAPG, the founding of the new guild confirms the idea of being able to continue to be involved as an experienced person, true to the motto "Once a scout, always a scout".  In order to provide the right framework for this with the VDAPG, it should continue to develop in the future.

Ideas for this were discussed at the board meeting from 30 January to 2 February 2020 in Nettetal by Helmut Reitberger as chairman, Hendrik Knop as deputy chairman, Hans-Werner Metzing as treasurer, Cathrin Rubel-Stange as managing director and Angela Dernbach as international representative, which concluded the founding of the new guild.