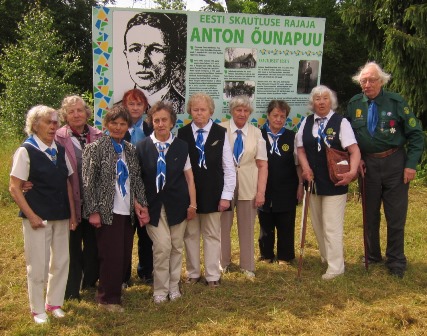 Anton Õunapuu (7 November 1887 – 2 April 1919) was the founder of the Boy Scouts in Estonia. He was buried on the Vändra Cemetry, 100 km from the capital of Talinn, on 9 April 1919. The Skautmaster gilde (Estonian Scout Masters), a new local Guild of young adults in the Estonia Fellowship organized on 29 April 2017 an excursion to the birthplace of the founder of the Estonian Scouting.

The house where Anton was born was destroyed in wartime and now the ground is marked with a monument. That day it was very bad weather and it was snowing, raining and a very cold wind was blowing. We could only plant an apple tree and did some small maintenance work. We continued to make a traditional tour on 12 June 2017 to places associated with Anton Õunapuu to tidy up as many as we can.  First we went to the birthplace where we now took care of everything. Then we drove

to the cemetery in the city of Vändra. There we cleaned the tombstone of Anton Õunapuu and planted flowers and afterwards we drove to the Jamboree in Tagametsa.

The Skautmaster gilde organized an international scout jamboree (over 500 scouts from 10 countries) from 8 to 15 July 2017. Our National President of NSGF Estonia, Valdik Kask, was there as the head of the camp, as well as others of the committee and the Chief Scout from Estonia, Kristjan Pomm (the Jamboree organizing team were wearing a red T-shirt). All was perfectly and in a very high level organized and the young boy scouts had many interesting attractions and actions. The Jamboree system allowed each participant to choose the activity the Scout preferred. That means that you had the possibility to build up a Jamboree programme according to your wishes. The Jamboree was divided into thematic days. As an example the first day was Safety Day where in cooperation with the Estonian Rescue, participants learn by doing safety etc. Other themes were: Extreme, Good Turn, Nature, Health and an Opinion Festival day. All together there were 123 different activities in the Jamboree. 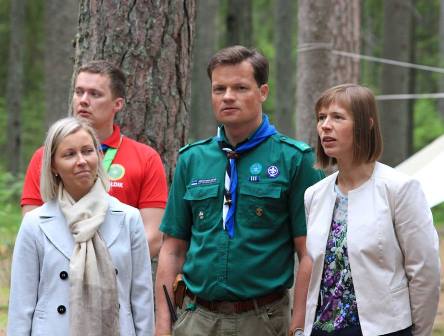 Visitors during this Jamboree were our current President of Estonia, Mrs Kersti Kaljulaid and Reelika Ojakivi, head of the Youth Department of the Ministry of Education and Research and also Pipi-Liis Siemann, Governor Türi Municipality. We spent more than 5 hours at the Jamboree but we had to go back to Tallinn.

See also this link to the International Scout Jamboree that was recently published on ISGF website.