70th anniversary of the Jamboree of Peace 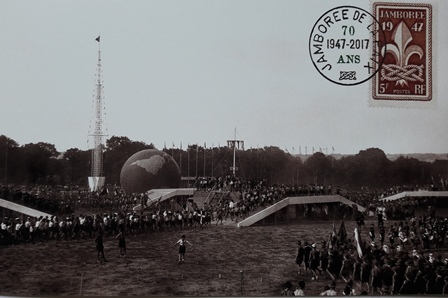 April 29, 2017, some representatives of the Federation of Associations and Friends of French Scouting, the FAAS, National Scout and Guide Fellowship in France, participated in the ceremony celebrating the 70th anniversary of the Jamboree of Moisson, "the Jamboree of Peace.” This Jam took place 80 km from Paris, in August 1947, barely two years after the end of the Second World War.

Among the speeches, Jean-Jacques Gauthé’s, outgoing President of the FAAS, historian of scouting, was particularly interesting.

In addition to the history of the Jamboree, Jean-Jacques spoke of the extraordinary welcome of the German Scouts by the French Scouts. The young Scouts, who had lived through the difficult times of these four years of war, or even more, had turned the page. The FUTURE of PEACE was open to all, without discrimination.

Jean-Jacques also recalled that the ISGF's “Scout and Guide Spirit Flame", during its journey (lit in Nyeri, Kenya, February 22, 2007-arrival at the Centennial Jamboree in Chelmsford near London, 1 August 2007), went through Moisson in July 2007 to celebrate the 60th anniversary of the Jamboree, but also the Centenary of Scouting; this visit was the occasion of extraordinary meetings of young French Scouts/Guides with participants in the Jamboree of Peace but also with many delegations of foreign National Scouts and Guides Fellowships.