Excellent visibility of ISGF at Jamboree 2011 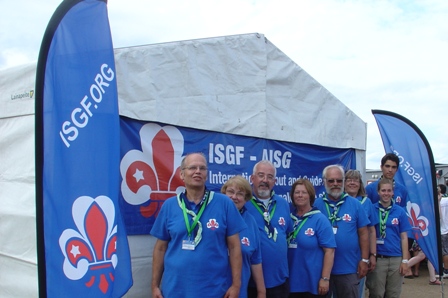 ISGF had a booth at the 22nd World Scout Jamboree in Sweden from 26 July to 6 August 2011 where a team of eight (8) full time and one part-time ISGF International Service Team (IST) members from various countries were focused on showing and promoting our organization.

The team members manned the booth in shifts during the whole Jamboree from 9 in the morning until 9 in the evening.

The exhibition turned out to be a great success and the contest was the most active section in the booth. It attracted more than four thousand (4000) visitors. We collected name cards from visitors and generated many follow up contacts. The Stamp Bank of our National Scout and Guide Fellowship of Sweden was present with their used stamps and a lot of collectors showed their interest.

The ISGF booth was in a busy area, next to the SwedishScoutingMuseum and the swapping area, allowing exchange of badges, pins, T-shirts, neckerchiefs and other Scouting memorabilia. That was advantageous for the number of visitors we attracted. It also had its drawback as a number of not interested visitors wanted to use our seating area, sometimes to get out of the sun or out of the rain. We were busy making sure the interested visitors could always come in.

For the young Scouts and Guides this was a fantastic event and despite some heavy rain showers they enjoyed their Jamboree.

A big thank you to everyone who stopped by to say hello and chat with us at the booth or fulfilled the contest and received the special ISGF Jamboree badge.