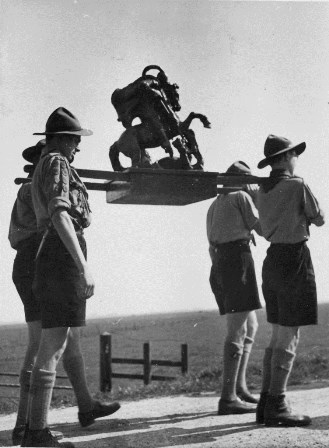 Wishing all the ISGF members a Happy Saint George’s Day, full of commemorations and celebrations together or without the Scouts.
But, I’m sure that many members don’t know the true story of Saint George.

Historians have debated for centuries the date of his birth, but they agreed that in 275 in Ancient Cappadocia actually belonging to the Turkish Republic, George was born. Still a child, after his father’s death in a battle, he moved with his mother to Lida, Palestine, her hometown and where she, being a wealthy woman, educated him very well.
At the adolescent age, George became a military very soon promoted captain of the Roman army due to his dedication and ability. His qualities led the emperor to give him the title of Count of the Cappadocia province.
At 23 after his mother’s death, he inherited and moved to the Imperial Court of Diocletian in Nicomedia, with the function of Military Tribune.
In 302, Diocletian published an edit that would send to prison all the Christian roman soldiers and all the others should offer sacrifices to the Roman gods. George went to the emperor to object and in front of all, declared himself as Christian.
Not wanting to lose one of his best tribunes, the emperor offered land, money and slaves, trying to dissuade him. As George maintained his fidelity to Christianity, the emperor tried several types of torture with no result, because each time he asked him if he would renegade Jesus to adore the Roman gods, the answer was always the same. Reaffirming his faith, his martyrdom was passing the message to many Romans and even to the emperor’s wife that converted herself to Christianity.
Finally, Diocletian, having no success, beheaded him on the 23rd of April 303 (28 years) in Nicomedia. Buried in Lida, were later the emperor Constantine built a sumptuous oratory open to the faithful, so devotion to the saint could be spread to the people of orient.
Saint George is worshipped by the Christian churches such as Catholic, Orthodox, and Protestant, and also the Umbanda, mostly in Brazil.
Being the Patron of the Scouts, he also is the patron of many countries and towns, such as: England, Portugal, Georgia, Lithuania, Cataluña, Serbia, Montenegro, Ethiopia, London, Barcelona, Geneva, Ferrara, Régio de Calabria, Friburgo in Brisgovia, Moscow and Beirut.
Knowing better the life of Saint George we understand why the Scouts have him as Patron and as a model.