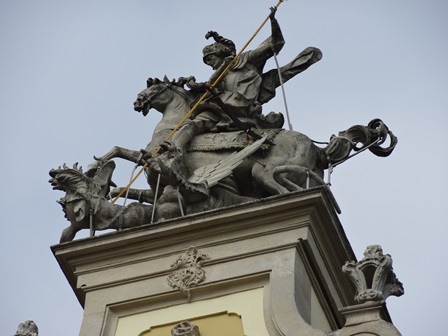 " Be prepared and Alert, a Scout follows the lead of our Patron St George and his spirited steed"
B-P

On this 23rd of April once again we celebrate the St George's Day, but as many members of ISGF are not acquainted with this celebration, nothing better than read what our Founder wrote about St George.
In Scouting for Boys, Baden-Powell tried to show Scouts a new path to chivalry and honor. St George was the Patron Saint of England, and the Knights of the Garter, the oldest order of chivalry in Europe. They were familiar subjects to most English boys when B-P was writing. Here is what he wrote:

"The Knights of the Round Table had as their patron St George, because he was the only one of all the saints who was a horseman. He is the Patron Saint of cavalry from which the word chivalry's derived, and the special Saint of England. He is also the Patron Saint of Boy Scouts everywhere; therefore all Scouts should know his story.
St George was born in Cappadocia in the year AD 303. He enlisted as a cavalry soldier when he was seventeen, and soon became renowned for his bravery. On one occasion he came to a city named Selem near which lived a dragon who had to be fed daily with one of the citizens, drawn by lot. 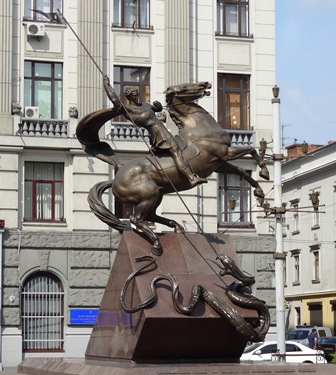 The day St George came there, the lot had fallen upon the Kings daughter, Cleolinda. St George resolved that she should not die and so he went out and attacked the dragon, who lived in a swamp close by and killed him.
When he was faced by a difficulty or danger, however great it appeared- even in the shape of a dragon- he did not avoid it or fear it, but went at it with all the power he could put into himself and his horse.
Although inadequately armed for such an encounter, having merely a spear, he charged in, did his best and finally succeeded in overcoming a difficulty which nobody had dared to tackle.
That is exactly the way in which a Scout should face a difficulty or danger, no matter how great or terrifying it may appear to him or how ill equipped he may be for the struggle. He should go at it boldly and confidently, using every power that he can to try to overcome it and the probability is that he will succeed."

Have a nice St George's Day